When it comes to the three main styles of cone crushers in the market, namely the Floating Bowl Cone, the Screw Bowl Cone and the Floating Shaft Cone, there is no one style that is solely and uniquely associated with a specific application, rather, they can all work but some are more suited than others. Depending on the type of material being processed and desired output in terms of tonnage or specification, customers have the opportunity to select any one of the three styles of cones from one single OEM, Terex MPS. 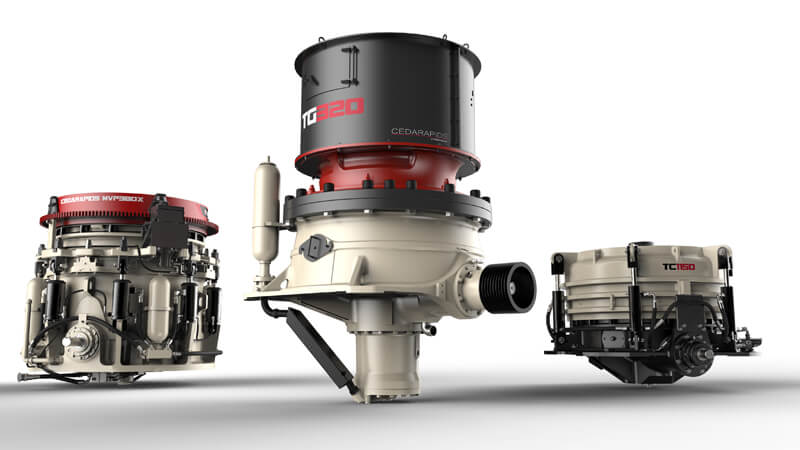 Wayne van Antwerpen, Group Crusher Technology Product Manager for Terex MP, talks us through the various cone crushers and their overall individual suitability for various applications, “We wanted to be in a position to offer a solution for every cone crushing application requirement while meeting the application needs of our customers with the best possible product quality and productivity. With the addition of the TG Series Cones to our cone crusher portfolio, we are now able to do that. The TG Cones Series allows us to further add the versatility of Bronze Bushing Technology to that of our current robust and efficient Roller Bearing Cones.

The Floating Bowl Cone, which is represented by the Terex TC Series, is ideally suited to most mining and quarrying applications, especially catering to the contractor clientele, from a secondary down to a quaternary position. The cone design performs consistently in a secondary position with an unscalped all-in-feed. This helps promote excellent shaped products through attrition crushing.”

The Screw Bowl Cone, which is represented by the Terex MVP Series offering, is also ideally suited to mining and quarrying applications, but according to Wayne, “due to the fact that this style of cone offers the large tramp iron stroke clearance, it would be the better choice when looking for a cone in a recycle type application where there is the possibility of smaller metal contaminants.” This type of cone is also well suited to high tonnage applications, and for those where large reduction ratios are required, fine/sand products are to be made, or that require strict product shape and grading requirements. The Screw Bowl Cones can work in secondary, tertiary and quaternary positions.

The Floating Shaft (Spider Bearing) Cone, represented by the newly launched Cedarapids TG Cones, is also ideal for mining & quarrying applications, with similar characteristics found on the Floating Bowl cone. The large feed secondary TGS version of the new cone, which can accept a feed size up to 75% bigger than its Fine version, allows it the unique ability to be positioned in a control fed primary position for sand and gravel applications. Speaking on the spider bearing difference offered by this range of cones, Wayne explains, “The Bronze Bushed TG Spider Bearing cones fall in-line with the other 2 styles of cones when it comes to applied power and productivity, but with the ability to change the eccentric throw of the cone easily and economically gives it increased application versatility. If a higher yield of a specific-sized product is required, the numerous eccentric throw options can be changed to suit the application requirements.”

The new Cedarapids TG Series cones consist of 4 models focused on the Aggregate and Construction industries, namely the TG120 (120hp), TG220 (220hp), TG320 (320hp) and TG420 (420hp) respectively. Each model is available in 2 versions, the TG (Fine) and TGS (Secondary). The TG style can be run in a secondary, tertiary and a quaternary position; the TGS models, which can take an approximately 75% larger feed, are perfect for large feed secondary positions. There will also be 2 larger models available for large capacity mining and quarrying applications, namely the TG820 (820hp) & the TG1020 (1020hp).

The first Cedarapids TG Series cone—TGS220—has recently been commissioned on the Mid North Coast, New South Wales, Australia. As Northern Region Sales Manager for Terex Jaques Australia, Ben Willcox explains, “Our customer was looking to replace an existing Allis Chalmers S36. When a rebuild was cost prohibitive, they turned to Terex Jaques for support and we were able to offer a new TGS220 at a competitive price that met all the customer’s requirements. Once commissioned, this unit increased capacity, improved reduction and allowed this site the opportunity to reduce plant operating hours. This unit also provides flexibility to adjust the stroke in the future should the plant be upgraded.”

Wayne VanAntwerpen concludes, “The new range of TG Spider Bearing cones puts us in a complete class of our own in the industry with no other OEM able to offer such a diverse and extensive cone crusher portfolio.”