A BUSY recycling company is planning to beat the freeze this winter thanks to investment in new plant. 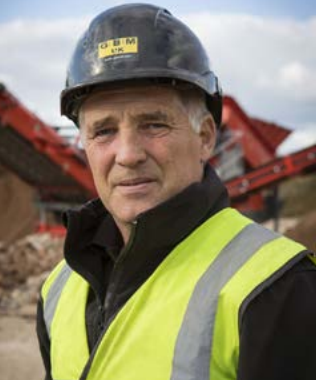 Soil production at GBM UK once ground to a halt for several months as old screening machinery struggled to cope with wet material. But the delivery of a Terex Finlay 883+ Spaleck has enabled the company to establish an allyear-round operation for the first time.
The machine, specified by Finlay Plant Northern – part of the Finlay Group of companies – proved its value during a trial last year and is now battling through soil, sand, brick and concrete on site in Doncaster, South Yorkshire. Paul Waite, Area Sales Manager at GBM UK, said: “We were extremely impressed with how the plant performed during the trial, so we decided to go for it."
“Soil production accounts for 75 per cent of saleable products from our Doncaster site, but we’ve previously been forced to stop production between November and February because our machines kept clogging up with wet material. “The Terex Finlay 883+ Spaleck copes well with the soil, even in wet weather, and that means we’ll be able to screen constantly throughout the year with increased throughput as well. “This is the first machine we’ve had from Finlay Plant Northern and we’re really impressed with the product and the service.”
GBM UK, which has headquarters in Louth, Lincolnshire, boasts an extensive plant hire fleet as well as fully integrated waste management packages including skips for residential use, DIY and builders’ schemes.
The company’s recycling centre turns material brought to the site by local authorities, utility companies and site developers into oversize, 75mm-10mm and sand. The plant, widely regarded as the ultimate in mobile screening and separation technology, operates near to blockage and maintenance-free and has a processing range of 1mm-120mm.
A high-performance, two-deck screen is at the heart of the machine with a rubber mat top deck and state-of-the-art Flip-Flow technology below. Martin Nairn, of Finlay Plant Northern, said: “GBM UK is a long-established company so it’s great for them to experience the benefits of the plant.
“We’re really excited as this is the 125th Terex Finlay 883+ Spaleck built and we’re proud that it’s for a Finlay Plant Northern customer.”
Más Noticias