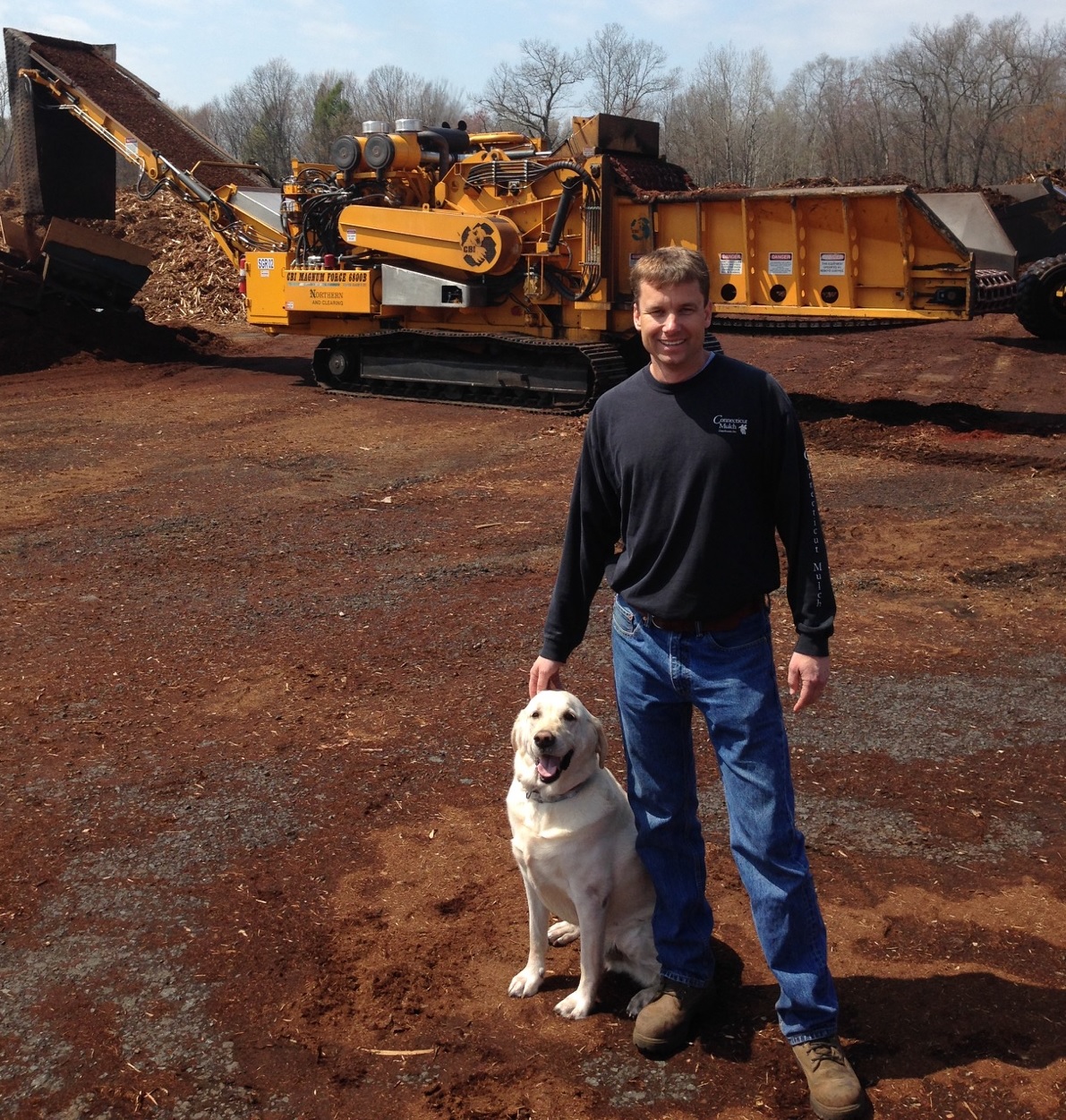 This article originally appeared in the May 2017 issue of Northern Logger.

ENFIELD, CT – Connecticut Mulch Distributors (CMD) started in the 70s with Kenny Lindeland hauling clean chips from northern lumber mills down to roadsides for Connecticut’s Department of Transportation. When those mills needed a way to get rid of the bark, Kenny and his wife Brenda spent the next forty years building one hell of a business.

Ten years ago they brought on their son, Kurt Lindeland, and have since grown from 13 employees into three companies: Connecticut Mulch Distributors, Connecticut Forest Products, and R&L Logging (named after Kurt’s children Raiya and Leif). The corporation now employs between 35 in the winter and its seasonal high of 60 in the spring.

“When I came on ten years ago it was just my mother and my father,” said Kurt Lindeland. “We got real comfortable working together and that’s when we quadrupled in the past ten years. We’ve been growing constantly, aggressively for the last ten years.”

Inbound bark comes to their business from all across the northeast region. About 70 percent of the end product they ship is bark and around 30 percent is color-enhanced mulch and playground surfacing. While they predominantly serve the state of Connecticut, they’ve quickly become one of the largest bulk mulch suppliers in New England.

But it didn’t come easy.

“These last ten years have been the most demanding of my life,” Lindeland admits.

With consolidation across the paper industry amidst the biggest economic downturn since the Great Depression, it’s hard to believe CMD hit its stride and quadrupled during the hardest times. Their longstanding partnerships have been key stabilizers, most notably with Finch Paper out of New York.

Finch is part of a $4 billion holding company with more than 15,000 employees dedicated to forest products and committed to growth in pulp and paper. They’re part of the sixth-largest producer of uncoated paper in North America, with the resources to stay at the forefront of the industry. Their flagship products—Finch Fine and Finch Opaque—have grown into household names and are complimented by a comprehensive portfolio of digital inkjet printing substrates and converting papers.

Finch has been the primary bark supplier to CMD for the last fifteen years, beginning when Finch needed a single reliable partnership to truck out a massive amount of bark. In return, CMD brings them paper chips.

“Connecticut Mulch has been a valued business partner of Finch that has grown and evolved over many years,” said Mike McLarty, vice president of forestry and wood procurement at Finch Paper. “They are currently a customer of our mill residuals offering consistent dependable pickup of bark from our facility and while also delivering high quality chips for our paper making process. Connecticut Mulch has grown to be one of our major wood suppliers over the past couple of years and we truly value their commitment to the business-to-business relationship.”

Kurt Lindeland spent his first day on the job ten years ago grinding bark from 3 a.m. to 4 p.m. and continued to learn the business for years to come. When his responsibilities expanded from hard work into hard decisions, they knew the next piece needed to be a mill to process the large amounts of pulp from a 60 mile radius. Despite financial apprehensions to build a mill in the challenging economic climate, they moved forward based on a rock-solid relationship with Finch Paper.

“The bark is key to our success and it’s a big reason why we built that plant,” Lindeland said of the bark coming from Finch.

“My father always said you can’t sell more if you don’t have it,” Lindeland said.

Ahead of their recent expansion five years ago, they made critical investments in a golden retriever named Mack who lifts everyone’s spirits and a CBI 6800BT to lead their fleet of wood grinders.

“Our demand is so high and we’re in a situation where we’re producing as much as possible so it kind of forced me to buy another CBI 6800BT,” Lindeland said. “We have five grinders, and tubs are great, but the CBI’s horsepower and production in a given day allows me to stay ahead.”

CMD grinds and ships upwards of 140 loads daily, leaning heavily on their two 6800BTs to meet the colossal demand. Mack (pictured to the right) is standing on 70,000 yards of hemlock bark, one of the many piles he likes to run around on.

“The amount of yards a 6800BT can produce in a given day is substantial—whether it’s primary or secondary grind,” Lindeland said. “We bought the first 6800BT five years ago and buying the second one for me was a no-brainer because of the production rates. I quickly saw the capability of not only primary but in finished grind. Production rates are incredible. It sounds like a commercial, but I spend less time doing the wrong things and more times doing the right things.”

Among the “right things” Lindeland has done is overseeing the completion of the Connecticut Forest Products mill to meet the Finch Paper demand. The mill has been in operation for three years up the road from CMD. Having completed the integration, they can now buy pulp, debark it, and chip it to meet demands for paper companies, power plants, and pellet plants.

Owning two CBI 6800s allows them to also accept remote projects while still producing back at the yard. Bob Obrien, a long-time employee of CMD, has been clearing yard waste for a municipality in Massachusetts this spring with the recycled product making its way to end users.

“You can see the piles: that’s the pre grind, that’s the finished grind,” Obrien explained. “They’re going to convert it to compost and normally we truck it out of here.”

The third company, R&L Logging, offers land clearing and logging services depending on market fluctuations, and supplies the Connecticut Forest Products mill with pulp. The family business is now large enough to offer forest-to-customer service, supplying in wholesale to landscapers and garden centers.

One of their many customers is Mohegan Sun Hotel and Casino, which spreads its grounds with mulch from the Lindeland’s business. And like Finch Paper, they’re impressed with the service and end-product.

“The mulch that we get from Connecticut Mulch Distributors is real good quality product that fits well with the site and they support the deliveries in a very timely fashion,” said John Harris, grounds supervisor at Mohegan Sun. “We’ve been real happy with their service over the past three years.”

Lindeland acknowledges that family businesses have their fair share of adversity but feels extremely fortunate for how well his vision meshed with his parents as he began to take a leadership role.

“We had our differences but were always able to work through them,” Lindeland said. “We try and keep things fun through the hectic parts of our peak shipping times. Our employees are incredibly dedicated to take on the spring season. We emphasize hard work and persistence but safety always comes first.”

Safety is a clear priority on the CMD yard. Employees respect procedures and maintain visible working zones. Even Mack, who runs beside Lindeland’s truck, has a dog’s understanding of the distance he should keep from heavy machinery that’s in operation.

Today, Kurt Lindeland is striving to process 500,000 yards annually and is already kicking around projects for coming years. When asked if CMD could quadruple again by 2027, he laughed at the suggestion but acknowledged that it remains the goal.