A History of Terex Corporation

Terex Corporation is focused on its mission of providing solutions to our Machinery and Industrial Product customers that yield superior productivity and return on investment. Terex has continued its evolution in recent years, primarily through a series of acquisitions and divestitures, designed to enhance the product offering, improve geographic coverage and deliver value to Terex customers, shareholders and team members.

The history of Terex is not a simple one. This is the history that led to the name “Terex” and the evolution that followed. However, there is an equally rich history to many of the “historic” names that Terex acquired in recent years. This document is intended to cover the highlights.

In 1933, the Euclid Company was founded by the Armington brothers. Its success designing and building haul trucks later attracted the attention of General Motors, which purchased Euclid in 1953. GM’s “Euclid Division” developed and sold large equipment including over half the nation’s off-highway dump trucks.

The dominant performance of Euclid had a negative consequence, however, when the US Department of Justice brought an antitrust suit against GM, forcing it to stop manufacturing and selling off-highway trucks in the US for four years, and to divest parts of its Euclid business and the Euclid brand name.

GM coined the "Terex" name in 1970 from the Latin words "terra" (earth) and "rex" (king) for its construction equipment products and trucks not covered by the ruling. The remaining parts of the new Terex business produced crawlers, front-end loaders, and scrapers. 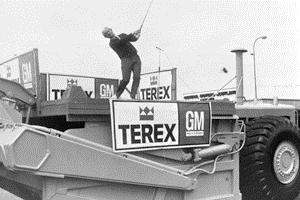 Throughout its maturation, GM’s Terex Division created some of the industry’s most notable heavy construction equipment, including the world’s first off-road hauler (1Z Trac-Truk), the world’s first twin-powered dozer (TC-12) and the world’s largest truck, the Terex 33-19 "Titan,” produced in the 1970s.

The single Titan prototype produced was in service until 1990 and is now on display in Sparwood, British Columbia, near the mine it served. It remains the world's largest truck by dimensions, but not by carrying capacity (370 tons).

The recession of the early 1980s took its toll on Terex, and General Motors sold Terex to IBH Holdings, a company owned by German businessman, Dieter Esch, in 1981.

IBH Holdings collapsed in a global recession and declared bankruptcy in 1983. Ownership of Terex reverted back to General Motors, who organized it as:

During the remainder of the decade, Terex made a number of acquisitions, including Koehring cranes and excavators (1987), Unit Rig (1988), and Fruehauf Trailer (1989). The Fruehauf acquisition alone resulted in Terex nearly tripling in size.

In 1991, Terex was listed on the New York Stock Exchange.

In the early 1990s, Terex took a series of steps to improve its financial picture, including spinning off Fruehauf as a separate public company.

Woody Baldus, CEO, passed away in the fall of 1991. Randolph Lenz assumed the title of Chairman and CEO. This led to the recruitment of Ron DeFeo in May 1992.

Ron DeFeo joined Terex as President of the Company’s then - Heavy Equipment Group in Tulsa, Oklahoma.

In 1993, Terex corporate offices were relocated to Westport Connecticut. Then, in October 1993, Ron DeFeo was appointed President and COO of Terex and a member of the Terex Board of Directors. 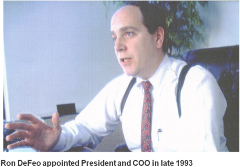 Facing a recessionary environment, DeFeo began an aggressive operational and financial restructuring of Terex that included raising additional capital, selling assets, and restructuring operations. Among the actions taken by Terex was a focused effort on turning around Clark Material Handling and the sale of its Fruehauf stock in the private market for $28 million.

Terex acquired PPM in 1995 and combined it with Koehring (now called Waverly), solidifying Terex as a leading manufacturer and distributor of cranes.

Randolph Lenz retired from Terex in 1995 and Ron DeFeo became CEO of the Corporation.

Ron DeFeo is named Chairman of the Board of Terex Corporation.

Over the remainder of the decade, Terex made important acquisitions including Powerscreen which was acquired in 1999.

In 1999, Terex became a leader in the crushing and screening industry with the acquisitions of Cedarapids, Re-Tech, Powerscreen and Finlay.

In 2000, Terex moved into the Compact Equipment category with the acquisition of Fermec, a UK manufacturer of tractor loader backhoes.

In 2001, Terex established the Roadbuilding business with the acquisitions of Jaques (crushing and screening), CMI (road building) and Bid-Well. The Atlas acquisition is also completed this year.

2002 was a significant year for Terex as it acquired several companies -- some large, some small.

In 2003, Terex acquired a controlling interest in TATRA, manufacturer of on/off-road heavy-duty vehicles for commercial and military applications.

In this same year, Terex expanded its company-owned Terex Utilities distribution with the acquisition of Commercial Body and Combatel.

Terex enjoyed success in 2006 and 2007, with growth in developing markets doubling.

Tatra was divested during that year.

In early 2008, Terex acquired ASV, a producer of compact track loaders. The corporation’s set of six core values – The Terex Way – was officially introduced in 2008 at the annual global leadership conference. 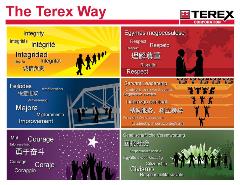 The global recession of 2008 hit Terex hard, with many markets seeing declines. Terex placed an increased focus on cash management and managing inventory levels during these uncertain times.

In 2009, Terex acquired the port equipment businesses of Fantuzzi and Noell – now part of the Cranes segment.

In 2006, Terex restated certain of its financial statements for the years 2000-2004. This led to an investigation of Terex’s accounting by the U.S. Securities and Exchange Commission (SEC). The SEC investigation was resolved by Terex entering into a settlement with the SEC in August 2009 that required Terex to pay a civil penalty of $8 million and enjoins Terex from committing or aiding and abetting any future violations of the U.S. securities laws.

In 2010, Terex divested its Mining business by selling it to Bucyrus International, Inc. Terex also divested its Atlas business. Terex increases its Chinese market presence in this same year with 65% control of Shandong Topower Heavy Machinery Corporation, maker of lattice boom cranes, and enters into a joint venture with NFLG to manufacture crushers and screens for aggregates.

As Terex continues to expand its reach in the developing markets, a Terex India Leadership Team is formed to act as a decision-making body for issues having India-wide Implications. New leadership also takes the reins in Terex Latin America.

A ribbon-cutting ceremony marks the official grand opening of the new Changzhou, China manufacturing facility, located in Shanghai. The new facility will serve as the product development, parts distribution and service center for the AWP segment in China. 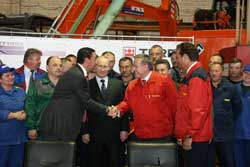 Terex is named one of the top companies for minority workers by Minority Engineer Magazine.

In August 2011, Terex completed the purchase of 82% of the shares of Demag Cranes AG, adding a new business segment – Material Handling & Port Solutions – to Terex with world-class products in industrial cranes and hoists, port technology and services.

In April 2012, the Domination and Profit and Loss Transfer Agreement (DPLA) between Terex and Demag Cranes became effective, paving the way for Terex to fully integrate Demag Cranes as a fifth segment of Terex Corporation. 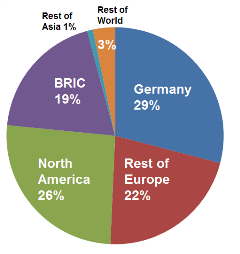 Today, Terex enjoys a well-balanced global business, with team members located throughout the world, supporting the needs of our worldwide customer base.