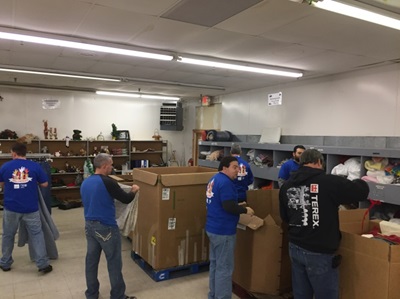 Watertown, S.D. (February 2, 2017) – Terex Utilities team members from across the nation traveled to Omaha, Neb., for the company’s annual sales training meeting the fourth week of January. While there, 74 of its employees spent time serving four local human service agencies in Omaha and Council Bluffs, Iowa.

Projects were facilitated by United Way of the Midlands, which included painting, organizing donations, and assembling care packages. All four local Omaha and Council Bluffs agencies provide shelter and/or meals for the homeless.

“Many people on out-of-town trips spend their free time in leisure activities, but not the employees of Terex Corporation,” said Danielle Ohlman, Director, Volunteer Engagement, United Way of the Midlands. “During their annual meeting week in Omaha, dozens of them rolled up their sleeves and helped out at Omaha-area nonprofit agencies.”

“At Terex, one of our core values is citizenship. While planning our annual sales meeting, we wanted to include activities that not only fostered team-building, but also gave team members the opportunity to volunteer,” said Jim Lohan, VP Sales and Marketing, Terex Utilities. “Terex supports local, community-based organizations that meet the needs of the communities where our team members live and work. United Way of the Midlands did an excellent job finding four agencies for us to serve in these local communities,” he said.

Terex volunteers helped out at New Visions Homeless Service and Micah House in Council Bluffs, and at Open Door Mission and Siena/Francis House in Omaha. “While it was optional for team members to participate, more than 90 percent of our attendees signed up and the experience was impactful,” said Lohan.

“They did more than clean, organize and complete painting projects for the nonprofits; they demonstrated a great sense of “community”, even coming from their own home cities to do it,” said Ohlman. “United Way of the Midlands thanks the Terex team for its community spirit, and is proud to have had the opportunity to assist in their company’s service projects.”