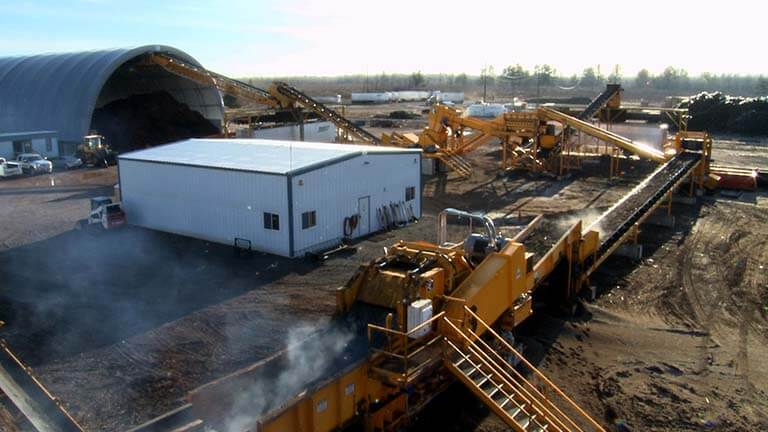 Processing 150,000 tons of raw railroad ties a year, the electric stationary system at Ties 2 does what other systems can’t. Railroad ties initially pass over a vibratory feed which removes debris and regulates the amount of material fed into the primary grinder. CBI’s 6060 horizontal grinder is a super heavyweight with a 5’ infeed and 5’ diameter solid steel rotor. Railroad ties, by design, are made from the hardest wood and are often the most contaminated with steel—the 6060 primary grinder powers through 130 tons an hour. After the primary grind, material passes under an electromagnet that removes and separates any metal that was ground up with the ties.

Material then passes through a CBI disc screener to remove any material small enough to pass the fuel spec while the oversized material moves on to the 4872 Grizzly Mill Secondary Grinder. This Grizzly Mill is a 6’ wide vertical grinder with a 4’ segmented rotor. The end product, which looks very similar to the average homeowner’s landscaping mulch, is transported to Minnesota Power and Excel Energy to generate more renewable energy for nearby regions.
Request a Quote Request Parts

We're sorry there are no specifications for this product at this time.